Time to pick up pieces 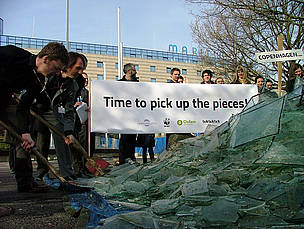 The international network TckTckTck together with its members Oxfam, WWF and Germanwatch send a visual signal to the government negotiators that it is time to get back to work and pick up the pieces after Copenhagen.


The NGO’s have arranged for four tons of broken glass to be dumped at a location where delegates pass by when entering the negotiation venue.

The pile of broken glass stands for the outcome of the Copenhagen climate talks in December, 2009. The ‘4 tons’ represents the upper range of temperature increase the world will experience as a result of the Copenhagen outcome. With the current state of ambition pledged by countries after Copenhagen, scientists expect the planet to be heading towards between 3.2 to 4°C warming. In the Copenhagen Accord countries had agreed to stop global warming at below 2°C and to consider 1.5°C as a limit.

Dozens of climate campaigners from various countries will stand behind the glass pile holding a banner that reads “Time to pick up the pieces!” (Ashwini Prabha)