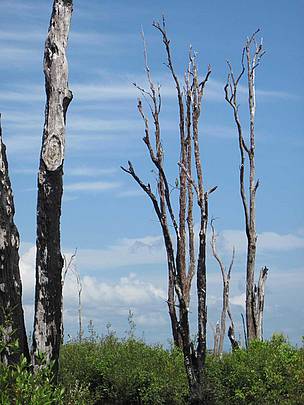 the remains of forest fire in Danau Sentarum National Park
© WWF-Indonesia/Panda CLICK!/ Tamin
Jakarta, 14 May 2019 -- A group of NGOs under the Anti Forest Mafia Coalition, including WWF-Indonesia, published a joint report highlighting that Sinar Mas Group’s Asia Pulp & Paper (SMG/APP) continues to be involved in deforestation, peatland destruction and fires even after they had committed to zero deforestation in 2013.

The NGOs analyzed an “Executive Summary” released by APP on 15 March, 2019. It was based on an assessment purportedly intended to address claims made by the Associated Press and by the Coalition that at least 24 of 27 wood supplier companies described by APP as “independent” appear to have close links and be under control of APP. The summary does not deny these claims and APP admits that four wood suppliers involved in the 2015 fires are partners over which it has “significant influence”, including possible ownership and management links. APP also acknowledges wood purchases from a supplier engaged in deforestation in East Kalimantan and a partner relationship with an East Kalimantan mill that purchased wood from a deforested rainforest.

“APP has had an excessive period of grace yet it has failed to show itself as a transformed business committed to sustainability. The Coalition’s findings raise fundamental questions about the oversight of APP’s sustainability commitments. Not only is the company lacking progress on restoration and conservation, it is still causing deforestation," said Aditya Bayunanda, WWF-Indonesia Director of Policy and Advocacy.

“A new era has to start to tackle this inaction by APP. Decisive interventions from the Indonesian administrations and further pressure from potential customers is needed to ensure real change," Aditya added.

The Forest Stewardship Council (FSC) has been developing a roadmap to end its disassociation with APP since 2016. These and other NGO allegations pushed FSC to send an ultimatum to APP in May 2018, demanding “a full disclosure by June 11 of Asia Pulp & Paper’s corporate structure including its wood suppliers, shell companies and offshore companies and their true ownership; and disclosure by June 11 of any other violations of the council’s standards”. APP’s failure to meet these demands pushed FSC further to suspend the process in August 2018 “while it awaits further information from APP related to its corporate structure and alleged unacceptable forest management activities by companies thought to be related to APP”.

NGOs also pointed out that the Executive Summary, which is not an independent auditor’s report as previously claimed by SMG/APP, falls short of FSC’s demand as the list of APP companies included in this new report does not cover the full scope of the SMG/APP’s corporate structure.

“APP must disclose the names, legal shareholders, and beneficial owners of all corporate entities controlled by, affiliated with, and/or linked to SMG/APP in all jurisdictions globally. In the absence of this, APP will remain as a company that is disassociated from FSC. We urge them to come clean and disclose its full environmental and social footprint and start taking meaningful actions to remedy their damages through actual conservation and restoration on the ground”, said Aditya.